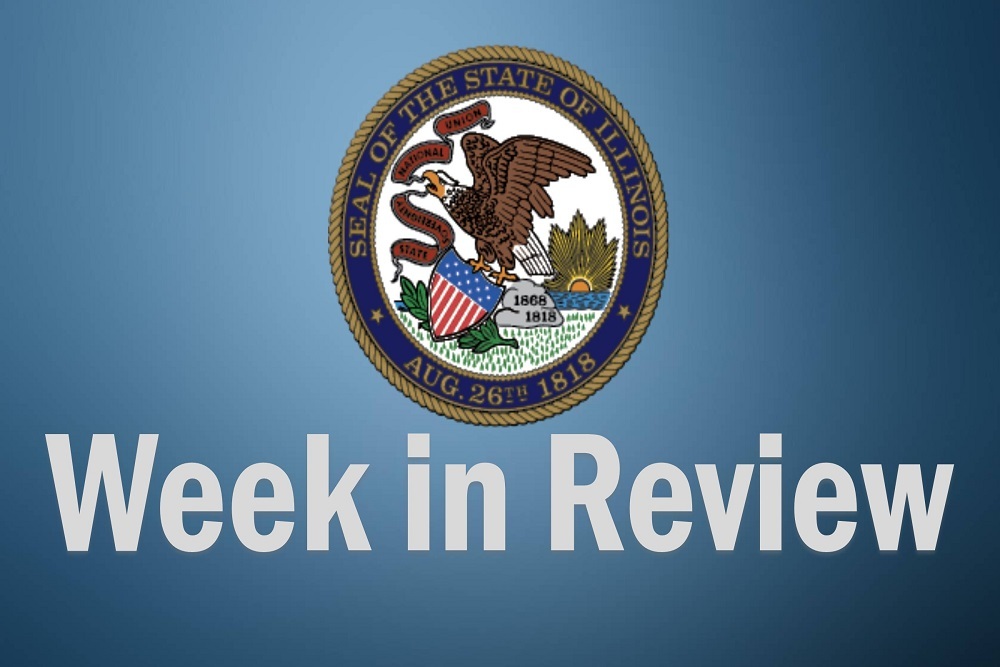 The events will honor the lives of those lost on 9/11/01 and the firefighters, police officers, and other first responders who courageously served on that tragic day. A web-based list of events throughout Illinois can be found here.

As with previous months in calendar year 2019, the report for August 2019 (the second month of State Fiscal Year 2020) showed mixed results. Income tax revenues fell by $48 million on a year-over-year basis, with the historically fluctuating numbers for corporate income taxes making up $21 million of the overall shortfall. Cigarette tax revenues fell on a year-over-year basis by $17 million, with new cigarette purchases declining by one-half as smokers drew down inventories they had purchased before the tax increase of July 1. Changing nicotine habits are also contributing to a decline in cigarette tax revenues.

On the other hand, sales tax numbers – an indication of consumer sentiment and ability to purchase big-ticket items such as motor vehicles – were healthy in August 2019. Sales tax cash flows rose $26 million over the comparable August numbers from 2018. Local governments, which get a share of the State sales tax and also often charge sales taxes of their own, also benefitted from this trend.

In their August 2019 report, COGFA staff speculated on the likely effects of the current U.S. Federal Reserve turn towards lower interest rates, with an analysis of the ability of this trend to spur new housing purchases, encourage refinancing transactions on existing properties, and create improved cash flow for Illinois households. Money that Illinoisans save on their mortgage payments may often be spent on other things, including the purchase of taxable goods and services and the payment of additional sales taxes. The COGFA report was released on Wednesday, September 4.

Chicago Bears celebrate centennial birthday. In honor of their 100 years of football, the Bears were chosen to kick off the 2019 NFL season in Chicago. The opening game was played on Thursday, September 5. “Da Bears” have ties to the city of Chicago where their home games are played at Soldier Field; the Chicago suburbs where the team’s practice facility and front office are located in Lake Forest; and Downstate with the origin of the team – Decatur, Illinois – home of George Halas’ “Decatur Staleys.” Owner Halas moved the football team in 1921, renaming them the “Chicago Bears.” (The Bears briefly came back Downstate in 2002, playing a full season at the University of Illinois’ Memorial Stadium while Soldier Field was being rebuilt.)

Crop progress report shows partial recovery from wet spring. The U.S. Department of Agriculture’s (USDA) weekly crop reports have shown the corn and bean fields of Illinois partly snapping back from the wet conditions of April through June 2019. Corn has gotten adequate sun and moisture in the second half of the crop year so far, and most of Illinois’ cornfields are moving though doughing and into denting. Most of the bean fields have moved through blooming and have set their pods. As of the first week of September 2009, however, almost nothing was mature and ready to harvest. Illinois corn conditions were 75% fair-to-good, with 19% poor or very poor. Illinois soybean conditions were 76% fair-to-good, with 17% poor or very poor. The USDA crop report was dated Sunday, September 1.

Vaping health crisis seen as research and reports continue. Many users are starting to consume nicotine through e-cigarette “vaping” devices that load fingertip-sized cartridges. The devices vaporize the drug with other chemicals, letting people inhale nicotine vapor without smoking cigarettes. Millions of Americans, including patients with existing lung diseases and breathing conditions, are exposing their respiratory systems to the chemicals associated with vaping behavior. Some companies sell flavored vaping cartridges that are attractive to young people, leading to a surge in youth vaping. The Illinois General Assembly enacted legislation this spring raising the minimum age to buy e-cigarettes (and conventional tobacco products) from 18 to 21.

Numerous reports are coming in from around the United States, including Illinois, of health concerns and even deaths associated with vaping and e-cigarettes. Vaping devices and vaping technology can also be used to consume cannabis and other respiratory drugs. As vaping behavior grows, Illinois lawmakers are discussing taking possible further steps to regulate the industry and discourage youth e-cigarette use. Michigan this week adopted administrative rules to ban the sale of flavored vaping cartridges in the Great Lakes State.

Federal audit finds Illinois’ Medicaid program spent $4.6 million on deceased persons. The finding was made as part of the federal Department of Health and Human Services’ (USDHHS) oversight of the Medicaid programs operated by all 50 states. Washington now has the right to demand repayment of the $3.2 million they had advanced to the Illinois Department of Healthcare and Family Services (HFS) for this Medicaid misspending. USDHHS, which has access to federal Social Security records that include payouts of Social Security death benefits, has found similar problems in California, Ohio, and Texas.

As part of the public/private portion of the overall Medicaid program, Illinois contracts with designated service gatekeeping firms, called “Medicaid managed care organizations” (Medicaid MCOs), for portions of the overall Medicaid headcount. Illinois owes these firms a debt for each name they have on their lists; and, in return, the MCO firms are “gatekeepers” that deal with the hospitals, clinics, and other service providers that provide healthcare services to each patient. The $4.6 million is money from taxpayers that Springfield paid to these gatekeeping firms with respect to names on these lists that represented patients who were deceased. Illinois should have purged each of these names from these billing lists, but did not. Now State taxpayers are left holding the bag. The embarrassing finding was released on Tuesday, September 4.

Want to get notified whenever we write about Illinois State House District 89 ?

Sign-up Next time we write about Illinois State House District 89, we'll email you a link to the story. You may edit your settings or unsubscribe at any time.